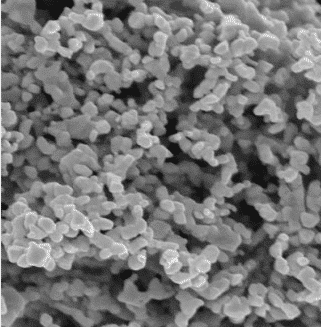 At present, there are two main methods to control the grain size:

The addition of inhibitors slows down the dissolution precipitation rate of WC, and there are three inhibition mechanisms:

1. The inhibitor adsorbs on the surface of carbide particles, which reduces the surface energy of WC and the solubility of WC in liquid phase.

2. The inhibitor dissolves in liquid CO, which slows down the growth of WC through liquid recrystallization.

3. The migration of WC interface was hindered by the segregation of inhibitors along WC / WC interface, which prevented the aggregation and growth of WC particles.

The inhibition effect of inhibitors is determined by the following factors:

1. Decreasing the particle size of WC powder increases the grain boundary area of WC Co. inhibitors can be widely distributed on the surface of WC, but they can not be increased indefinitely. Their limit value depends on their saturation concentration in the bonding phase.

2. Cobalt content. With low content of binder and short free stroke, the inhibitor is easy to play its role at a certain temperature.

1. WC, CO and grain growth inhibitor were mixed in the wet grinding process.

Transition metal carbides are common inhibitors of grain growth. The effectiveness of transition metal carbides in inhibiting WC grains is related to their own thermodynamic stability. The order of their thermodynamic stability is VC > Cr3C2 > NBC > TAC > tic > ZrC > HFC. However, each kind of carbide has a maximum amount that can be added, which has no further effect on inhibiting the growth of WC grains. At a certain temperature, the amount of carbide additives depends on the saturation concentration of the carbide in the binder phase and the content of the binder phase Table 2 shows the solubility of various additives in CO phase. It can be seen from the table that VC and Cr3C2 have the highest solubility in CO phase and they have the lowest binary eutectic temperature, so they are widely used as WC Co grain growth inhibitors.

Rare earth element is one of the common additives, which can inhibit the grain growth, improve the structure distribution, purify the grain boundary, and play an effective role in strengthening and toughening the cemented carbide. At the same time, rare earth can also reduce the sintering temperature of cemented carbide, which can solve the contradiction between controlling grain growth and Sintering Densification. the increase of the macro compressive stress on the alloy surface is also an important reason for the increase of the strength of WC Co cemented carbide by the addition of rare earth oxides.

Effect of grain growth inhibitor on properties of alloy

The addition of VC, Cr 3C 2 and other additives can effectively improve the heat resistance and wear resistance of WC Co cemented carbide. Moreover, the high temperature strength and high temperature hardness of the alloy can be effectively improved when the additive is appropriate, but the room temperature strength of the alloy can be reduced and the alloy becomes brittle. Therefore, the amount of additives must be controlled within a certain range For example, for WC-6% CO and WC-10% Co alloys, the addition of cr2c3 reduced the room temperature bending strength of the alloy. When the content of Cr 2C 3 is 0.3% ~ 0.5% (mass fraction of CO content), the room temperature bending strength of the high Co alloy will not be affected obviously, but for the low Co alloy, the room temperature bending strength will be decreased obviously. Adding TAC and NBC will result in the same result The effect of VC on the microstructure and properties of wc-6.5% Co cemented carbides was found. It was found that VC inhibited the growth of WC grains, which resulted in obvious grain refinement and narrowed the distribution of grain size. The grain size decreased from 0.5-1 μ m without adding VC to 0.15 μ m with adding 2.0% VC. At the same time, the hardness of the alloy is greatly improved by adding VC, and the maximum value is 94.1 HRA when VC content is 2.0%. But it also reduces the strength of the alloy When VC content is 0.5%, the hardness and toughness of the alloy are 93.0hra and 11.2MPa · M 1 / 2, and the comprehensive properties are the highest. The addition of TAC can not only prevent the WC grains from growing too much, but also reduce the carbon content of the alloy