The rake face is the surface through which the chip flow passes.

The main flank is the surface opposite to the cutting surface of the workpiece.

The secondary flank is the surface opposite to the machined surface of the workpiece.

The auxiliary cutting edge is the intersection line between the rake face and the auxiliary flank, which takes on a small amount of cutting work and plays a certain role in polishing

The tool tip is the intersection of the main cutting edge and the auxiliary cutting edge, which is generally a small transition arc.

2、 Form and structure of turning tool

The most commonly used turning tool structures are as follows:

3、 The main angles of turning tools and their functions are rake angle (γ 0), rake angle (α 0), main deflection angle (KR), minor deflection angle (KR) and edge inclination angle (λ s). In order to determine the angle of turning tool, three coordinate planes should be established: cutting plane, base plane and main section. For turning, if the influence of turning tool installation and cutting motion is not considered, the cutting plane can be considered as a vertical plane; the base plane is a horizontal plane; when the main cutting edge is horizontal, the section perpendicular to the main cutting edge is the main section.

(3) The main deflection angle Kr is measured in the base plane, which is the angle between the projection of the main cutting edge on the base plane and the feed direction. Its functions are as follows:

1) It can change the cutting length of the main cutting edge and affect the tool life.

2) It affects the size of radial cutting force.

The grinding steps of turning tool are as follows:

Grind the main flank, and grind out the main deflection angle and main rake angle at the same time, as shown in figure (a);

Grind the front while grinding the front corners, as shown in figure (c);

Grind the tool faces and tips, as shown in (d) above.

The posture and method of sharpening turning tool are as follows:

People stand on the side of the grinder to prevent the fragments from flying out to hurt people when the grinding wheel is broken;

The distance between the two hands holding the knife is released, and the two elbows are clamped at the waist to reduce the shaking when grinding the knife;

(3) When the cutter head is ground hot, it should be cooled with water to avoid annealing and softening due to high temperature rise. When grinding cemented carbide turning tools, the tool head should not be stained with water, so as to avoid the cracks caused by the rapid cooling of the blade.

vamtam-theme-circle-post
 カテゴリー 毎週の切削工具
At present, the vast majority of metal cutting is carried out by wet method mainly...
続きを読む

vamtam-theme-circle-post
 カテゴリー 毎週の切削工具
The top angle of the twist drill is usually 118 °， It can also be...
続きを読む

vamtam-theme-circle-post
 カテゴリー 毎週の切削工具
The misunderstanding of quality problems The quality of the product is produced, not tested. Only...
続きを読む 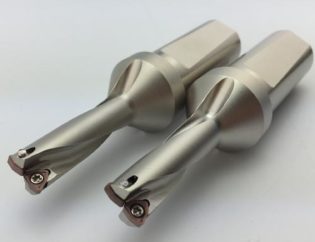