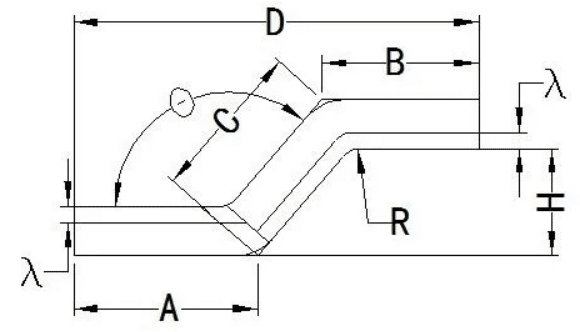 The calculation principle of expansion is as follows

a. B is a direct boundary value tangent to R

1. When the n-fold processing method is to fold and flatten the gasket, press

When n-fold is processed in other ways, it is calculated according to the general bending (R ≠ 0 θ≠ 90) “

design value of dimension with tolerance:

For some products with low precision and need to be welded and polished, we can open a bending process hole at the bending corner. The size is determined by the plate thickness. It should be larger than the plate thickness, and it should not be too large. In the programming process, we should try to select the appropriate mold that has been used. (easy to reduce mold and processing time).

No process hole is needed for all the edge lapping relationships;

There are three kinds of graphs: all inclusive, half inclusive and edge overlapping.

For the thickness t ＜ 1.5mm, there is no need to open the process hole;

If the plate thickness t ≥ 1.5mm with edge wrapping, the process hole shall be added at the corner.

There are two kinds of process holes: round and U-shaped; the center of the long round hole is on the bending line.

As shown in figure A.B

The expanded part is the part of line segment, which is processed into the form of process hole as shown in the figure below: as shown in Figure C

when the distance between the Extraction edge and the bending edge (inner dimension) is less than 2.0 mm, the bending process will be affected. At this time, the corresponding bending deformation area will be cut or the extraction dimension will be changed, as shown in Figure E

Under the following circumstances, it is not allowed to open process holes:

Parts with appearance or assembly relationship requirements and without customer’s permission;

Separate shipment, without the customer’s permission.

2) In the following cases, the programmer can open the process hole at his own discretion:

the workpiece that needs to be welded and filled up in the next process after opening the angle of the process hole;

the workpiece that is not the appearance surface and does not affect the assembly and function, and is assembled inside the whole machine for shipment.

In the following cases, the Engineer shall negotiate with the customer to open the process hole

Work pieces that affect bending or die forming but have no process holes on the drawing.

All the parts without fillet (laser) after product development shall be rounded according to r0.5.

what do we do about hole around a bending edge

It is worth noting that when we find that there is a hole close to the bending edge in the process of unfolding, and the hole will bend after bending, we need to inform the engineer whether to open the bottom hole first and then expand the hole after bending.

There are two general formulas for reference

in the process of unfolding, smooth surface and burr surface are one of the important contents that we must consider. Generally, for those not specified in the drawing and not specially required by customers, such as folding a box, we usually regard the inside as burr surface and the outside as smooth surface. For customers (such as Japanese customers such as VGI, TBS, Seiko, etc.), there are special requirements, which are clearly indicated in the drawings. We will carry out according to the requirements of the drawings.

Note: the minimum bending L in the table must be upper die with sharp knife;

Material saving placement: after the unfolding inspection is OK, we have to choose a reasonable placement method (generally x value > y value) to see how to place the most economical material, and rotate the unfolding drawing to a reasonable position (do not mirror, the burr surface will be reversed) And then arrange the knives.

vamtam-theme-circle-post
 Kategoria Industrial Products Weekly
It is a grinding container that grinds granular materials into powder by vibration. When working,...
Czytaj więcej

vamtam-theme-circle-post
 Kategoria Industrial Products Weekly
Today I am going to introduce some strange looking micrometers. Let’s see what you have...
Czytaj więcej