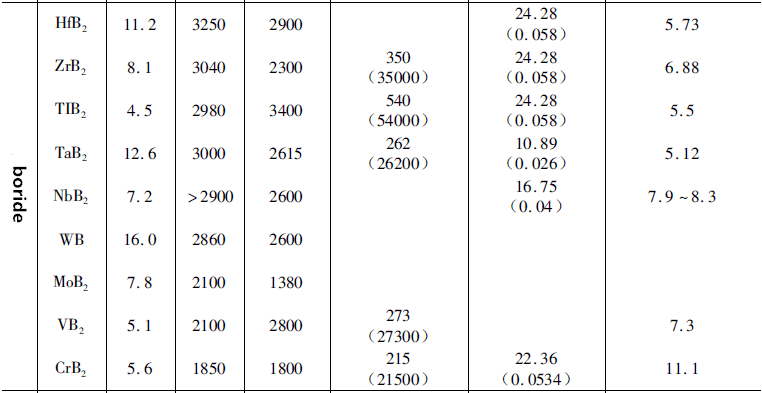 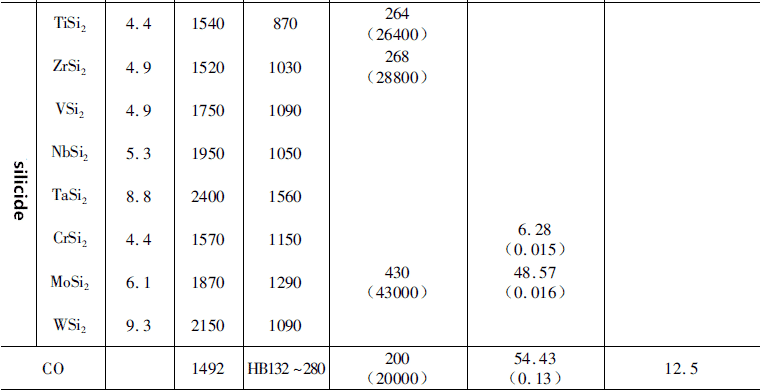 Because of the high melting point,high hardness (see Table 1-1),good chemical stability,and good thermal stability that carbides in the cemented carbide have and the large amount of high-temperature carbon materials, the hardness and resistance Abrasiveness and heat resistance are higher than high speed steel.
The main component of the hard alloy hard phase is WC. WC has good wear resistance.although some carbides have the same hardness and WC, but do not have the comparable wear resistance. Besides,WC has a higher yield strength (Table 1-2), so its resistance to plastic deformation is better. WC has good thermal conductivity, which is one of the most desirable properties for making tool materials. In addition. WC has a low coefficient of thermal expansion that is about 1/3 of steel.WC’s modulus of elasticity is three times that of steel, and its torsional modulus is twice that of steel. Therefore, the compressive strength of cemented carbide is also higher than that of steel. In addition, WC has good corrosion and oxidation resistance at room temperature, good electrical resistance, and high flexural strength. these excellent properties of WC have been passed to a hard alloy with its main component.

Compared with high speed steel, the hardness of cemented carbide is HRA89-94, which is much higher than the hardness of HSS (HRC63-70 or HRA83-86.6). The maximum cutting temperature allowed for cemented carbide can reach 800-1000 °C or more, which could be much higher than HSS’s (550-650 ℃). The high temperature hardness of cemented carbide could be HRA82-87 at 540 °C,which is the same as the normal temperature hardness of high speed steel. The hardness at 760 ° C is HRA 77-85, and can maintained in HRA 73-76 at the environment of 1000-1100 ° C. Besides,Carbide’s wear resistance of cemented carbide is 16-20 times higher than that of the best HSS. Due to its high temperature hardness and wear resistance, cemented carbides have much higher cutting performance than high-speed steel and can increase tool durability by several tens of times. When machining ordinary structural steel, the cutting speed allowed is 4-10 times higher than that of high speed steel tools.
As a cutting tool material, cemented carbide is widely used (see Table 1-3)). In the turning process, except for a small number of small diameter bores and some non-ferrous metal workpieces, almost all of them can be processed with carbide turning tools. In the drilling process, in addition to the existing carbide drills, carbide drills, deep hole drills, carbide injection drills and indexable carbide drills have also been successfully used to machine steel. In addition, carbide end mills have been widely used. Others such as reamer, end mill, small modulus gear hob, medium and large modulus gears for hard tooth surfaces (such as m40 hob and m12 pin cutter), broaches and other tools use hard Alloys are also increasing. Although the proportion of cemented carbide in tool materials is lower than HSS and ranks second, its proportion of cutting chips is as high as 68%. (According to the 1979 US prof. of cemented carbide company that’s visited to China, in the United States, carbide cutting tools cut off 80% of cutting chips. ). According to reports, in some countries, more than 90% of turning tools and more than 55% of milling cutters are made of cemented carbide, and this trend continues to grow.

vamtam-тематический круг-пост
 категория Материалы Еженедельно
Surface treatment is a process of forming an artificial surface layer on the surface of...
Читать далее

vamtam-тематический круг-пост
 категория Материалы Еженедельно
Cemented carbide is a kind of alloy made by powder metallurgy with one or several...
Читать далее