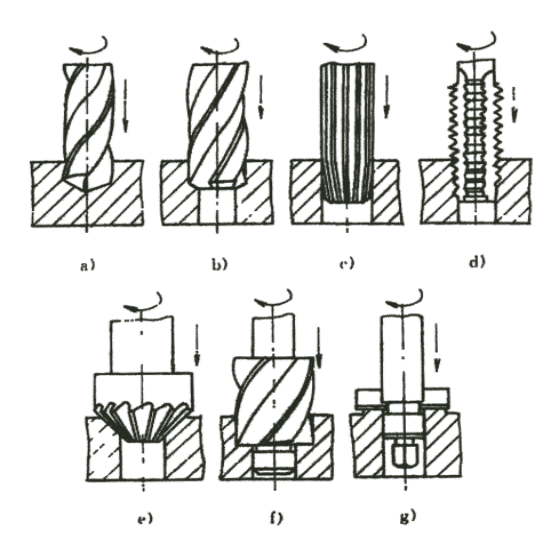 Drilling machine is a machine tool for machining internal holes. It is used to machine holes in solid materials. It is mainly used for machining workpieces with complex shapes and without symmetrical rotation axes, such as single holes on parts such as levers, covers, boxes and frames. Hole system. The drilling is rough machining.
• Process characteristics of drilling
(1) When the drill bit is cut in a semi-closed state, the amount of cutting is large,and chip removal is difficult.
(2) The friction is severe, generating more heat and making h
eat dissipation difficult.
(3) The high speed and high cutting temperature cause the bit to wear seriously.
(4) Squeeze is severe, the cutting force required is large, and it is easy to produce cold work hardening of the hole wall.
(5) The drill bit is thin and overhanging, and it is easy to bend and vibrate during processing.
(6) The drilling accuracy is low, the dimensional accuracy is IT13 to IT10, and the surface roughness Ra is 12.5 to 6.3 μm.·

The drilling process has a wide range of processes. Different tools can be used on the drilling machine to complete the drilling center hole, drilling, reaming, reaming, tapping, boring and boring end faces, as shown in the figure. The drilling accuracy on the drilling machine is low, but the hole with high precision (IT6~IT8, surface roughness is 1.6-0.4μm) can also be machined by drilling—-reaming—-reaming hole. The fixture can be used to machine the hole system with position requirements.
When machining on the drill press, the workpiece is fixed and the tool moves in the axial direction (feed motion) while rotating (main motion).

The handle is the clamping part of the drill bit, which is used to connect with the machine tool and transmit torque and axial force during drilling. The handle of the twist drill has two kinds of taper shank and straight shank. Straight shanks are mainly used for small twist drills with a diameter of less than 12 mm. The taper shank is used for twist drills with a large diameter and can be inserted directly into the spindle taper hole or inserted into the spindle taper hole through the taper sleeve. The flat tail of the taper shank is used to transmit torque and is used to easily remove the drill bit.

The neck groove of the twist drill is the overrunning groove of the grinding wheel when grinding the handle of the drill bit. The bottom of the groove is usually engraved with the specifications and the factory mark of the drill bit. Straight shank drills have no neck.
The composition of the cutting part
The cutting part is responsible for the cutting work and consists of two front faces, a main rear face, a rear back, a main cutting edge, a minor cutting edge and a chisel edge. The chisel edge is the edge formed by the intersection of the two mains, and the back is the two belts of the drill bit, which are opposite to the workpiece hole wall (ie the machined surface) when working, as shown.
The guiding portion is a guiding action when the cutting portion is cut into the workpiece, and is also a grinding portion of the cutting portion. In order to reduce the friction between the guiding portion and the wall of the hole, the outer diameter (i.e., on the two land) is ground with an inverted cone of (0.03 – 0.12) / 100. (0.03 to 0.12 reverse taper per 100mm length)
In addition, in order to improve the rigidity of the drill bit, the diameter of the core between the two blades of the working portion is made to be a positive taper of (1.4 to 1.8)/100 in the axial direction.
(1) rake face: the rake face is the surface of the spiral groove, which is the flow of chips through the surface, which acts as a chip and chip. It needs to be polished to make the chip removal smooth.
(2) Main flank: The main flank face is opposite to the machined surface and is located at the front end of the drill. The shape is determined by the sharpening method. It can be a spiral surface, a conical surface and a flat surface, and any surface that is manually sharpened.
(3) Sub flank: The minor flank is a narrow facet on the outer cylindrical surface of the drill opposite the machined surface.
(4) Main cutting edge: The main cutting edge is the intersection of the rake face (spiral groove surface) and the main flank face. The main twisting edge of the standard twist drill is straight (or nearly straight)
(5) Sub-cutting edge: The minor cutting edge is the intersection of the rake face (the surface of the spiral groove) and the minor flank face (narrow facet), that is, the edge.
(6) Transverse blade: The chisel edge is the intersection of the two main flank faces, which is located at the foremost end of the drill bit, also known as the drill tip.

the geometric angle of the drill bit

When machining hard and brittle materials, the use of carbide drills can significantly improve cutting efficiency.
The following hard alloy twist drills are made into a monolithic structure, which can be made into a straight shank carbide hard twist drill, which can be used as a taper shank carbide hard twist drill.
Compared with the high-speed steel twist drill, the core has a larger diameter, a smaller helix angle, and a shorter working portion. The cutter body is made of 9SiCr alloy steel and hardened to 50-52HRC. These measures are designed to improve the rigidity and strength of the drill bit to reduce the chipping caused by vibration during drilling.
(2) Deep hole drilling
Deep pores generally refer to pores having a pore length to diameter ratio greater than 5 times. When drilling deep holes, it is necessary to solve the problems of chip breaking and chip removal, cooling and lubrication, and guiding.