Rolling is a processing method in which the metal blank passes through the gap (various shapes) of a pair of rotating rolls, and the material cross section is reduced and the length is increased by the compression of the rolls. It is the most common production method for producing steel, and is mainly used for production. Profiles, plates, tubes. 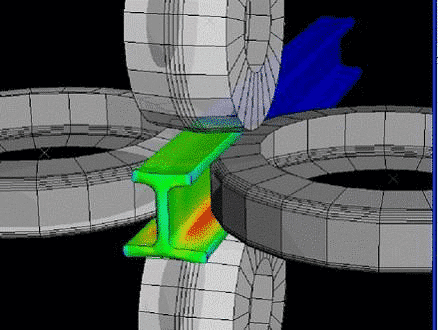 The cast structure of the ingot can be destroyed by it. Besides, the grain of the steel can be refined, and the defects of the microstructure can be eliminated. so that the steel structure is compacted and the mechanical properties are improved. This improvement is mainly reflected in the rolling direction, so that the steel is no longer isotropic to a certain extent,bubbles, cracks. The looseness formed during casting can also be welded under high temperature and pressure.
Disadvantages of rolling
1. After rolling, non-metallic inclusions (mainly sulfides and oxides, as well as silicates) inside the steel are pressed into thin sheets, causing delamination (sandwich). The delamination greatly deteriorates the tensile properties of the steel in the thickness direction, and it is possible that interlaminar tearing occurs when the weld is shrunk. The local strain induced by weld shrinkage often reaches several times the yield point strain and is much larger than the strain caused by the load.
2. Residual stress caused by uneven cooling. The residual stress is the internal self-phase equilibrium stress without external force. The hot-rolled steel of various sections has such residual stress. The larger the section size of the general steel, the larger the residual stress. Although the residual stress is self-phase-balanced, it still has some influence on the performance of steel members under external force. Such as deformation, stability, fatigue and other aspects may have adverse effects.
3. Hot rolled steel products are not well controlled for thickness and side width. We are familiar with thermal expansion and contraction. Since the hot rolling is started at the beginning even if the length and thickness are up to standard, there will be a certain negative difference after cooling. The wider the width of the negative difference, the thicker the thickness is. Therefore, for large steel, the side width, thickness, length, angle, and edge of the steel cannot be too precise.

It is one of the two major components of forging (forging and stamping) by using a forging machine to apply pressure to a metal blank to plastically deform it to obtain a forging having a certain mechanical property, a certain shape and size. Through forging can eliminate defects such as as-cast looseness caused by metal in the smelting process, optimize the microstructure, and at the same time, the mechanical properties of the forgings are generally better than those of the same materials due to the preservation of the complete metal flow lines. For important parts of the relevant machinery with high load and severe working conditions, forgings are often used except for the available rolled sheets, profiles or welded parts.
Features of forging:
Compared with castings, forging metals can improve their microstructure and mechanical properties after forging. After the hot-formed deformation of the cast structure by the forging method, the original coarse dendrites and columnar grains become the equiaxed recrystallized structure with fine grains and uniform size due to the deformation and recrystallization of the metal, so that the original segregation in the steel ingot, The compaction and welding of loose, stomata and slag inclusions make the structure more compact and improve the plasticity and mechanical properties of the metal.
The mechanical properties of castings are lower than those of forgings of the same material. In addition, the forging process can ensure the continuity of the metal fiber structure, so that the fiber structure of the forging piece is consistent with the shape of the forging piece, and the metal streamline is complete, which can ensure the good mechanical properties and long service life of the part by precision die forging and cold extrusion. Forgings produced by processes such as warm extrusion are incomparable to castings.

Comparison of forgings and rolling workpiece:

a. The difference between the axial and radial mechanical properties of the forgings is smaller than that of the rolled parts. That is to say, the isotropy of the forgings is much higher than the isotropy of the rolled parts, so the life of the forgings is much higher than that of the rolled parts. Rolled parts. The figure below shows the metallographic diagram of the morphology of eutectic carbides in different directions of Cr12MoV rolled sheet.
b. From the degree of deformation, the degree of deformation of the forging is much greater than the degree of deformation of the rolled piece, that is to say, the effect of breaking the eutectic carbide by forging is better than the crushing effect of the rolling.
c. In terms of processing cost, the cost of forging is much higher than the cost of rolling. For some key parts, workpieces subjected to large loads or impacts, workpieces with complex shapes or very strict requirements, it is necessary to use forged Process for processing.
d. The forging has a complete metal streamline. After rolling, the mechanics destroy the integrity of the metal streamline, which greatly shortens the life of the workpiece. The figure below shows the metal flow lines for casting, machining, and forging workpieces.