We are aware of that surface roughness means a lot in manufacturing industry. When the concept is recalled to your mind, there must be some common textures on machined parts, such as bright mirror surface, matte, and dull polish. They are what different surface roughness embodies in macroscopic condition.

As is known to us, asperity of a part’s surface can be profiled as a series of jagged valleys in which there are crest, through, and spacing between them.

As a concept describing surface’s microscopic structure, surface roughness in fact is the length S between these crests(or troughs, usually below 1mm) and depth Z from trough to crest shown in the following diagram.

In general, we differentiate varying surface condition according to the range of S.

S＜1mm, the asperity is regarded as surface roughness,

3 standards and their comparison table

In China, the standards measuring surface roughness by the 3 Indexes, (unit:mm)which are average arithmetic deviation of contour Ra, average height of unevenness Rz, and the maximum depth of the valley Ry.

In most of actual production activities, Ra is mostly applied. While in Japan Ry gets mostly used, referred as Rmax. People in European region use VDI 3400. We’ve made a comparison table of the 3 standards shown as below,

Surface roughness is generally formed by processing methods and other factors, such as friction between tool and part surface, plastic deformation of surface metal when chips are separated, high frequency vibration in process system, discharge pits in electrical machining, etc. Because of the difference of processing method and workpiece material, the depth, density, shape and texture of the traces left on the machined surface are different.

The Main Effect of Surface Roughness on Parts

Affect the stability of coordination.

The fatigue strength is affected.

There are large troughs on the surface of rough parts. Like sharp notches and cracks, they are sensitive to stress concentration, which affects the fatigue strength of parts.

Rough parts surface, easy to make corrosive gases or liquids through the surface of the micro-valley infiltration into the metal inner layer, resulting in surface corrosion.

Rough surfaces do not fit tightly, and gases or liquids leak through cracks between contact surfaces.

Contact stiffness is the ability of parts to resist contact deformation under external force. The stiffness of the machine depends to a great extent on the contact stiffness between the parts.

The measurement accuracy is affected

The surface roughness of measured parts and measuring tools will directly affect the accuracy of measurement, especially in precision measurement.

In addition, surface roughness has different effects on coating, thermal conductivity and contact resistance, reflectivity and radiation performance, resistance of liquid and gas flow, and current flow on conductor surface.

The datum line is the contour midline used to evaluate the surface roughness parameters. There are two kinds of datum lines: the least squares midline of the contour: within the sampling length, the sum of the outline offset of each point on the contour line is the smallest, and it has a geometric contour shape. Arithmetic mean midline of contour: Within sampling length, the area of contour on both sides of the midline is equal. In theory, the least squares midline is an ideal datum line, but it is difficult to obtain in practical application. Therefore, the arithmetic average midline of contour is generally used to replace it, and a line with approximate position can be used to replace it in measurement.

Ra contour arithmetic mean deviation: the arithmetic mean of the absolute value of contour offset within the sampling length (lr). In practical measurement, the more the number of measuring points, the more accurate Ra is.

Maximum height of Rz contour: the distance between the top line of contour peak and the bottom line of valley.

The average width of the RSM contour unit. Within the sampling length, the average distance of contour micro-roughness. Microscopic irregularity spacing refers to the length of contour peaks and adjacent contour valleys on the midline. In the case of the same Ra value, the Rsm value is not necessarily the same, so the reflected texture will be different. The surface that pays attention to the texture usually pays attention to the two indicators of Ra and Rsm.

The surface roughness is slowly sliding along the measured surface with a diamond stylus whose radius of curvature is about 2 micron. The displacement of the diamond stylus is converted from an electrical length sensor to an electrical signal. After amplification, filtering and calculation, the surface roughness value is indicated by a display instrument. The profile curve of the measured section can also be recorded by a recorder. 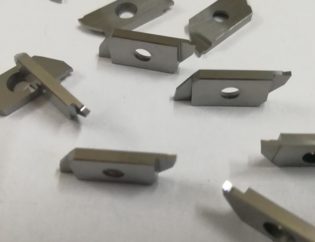