 Category Materials Weekly
22 May, 2019
In recent research, the design and regulation of material properties by combining defect engineering is currently a research hotspot. In transition metal oxides, sulfides and other materials, the presence of defects will significantly change their electronic structure and chemical properties, thereby achieving their wide application in the field of energy storage and conversion. For example, in the structural design of battery materials, quantitative introduction of defects can improve the electrical conductivity of the material, provide more active sites, and improve the phase transition of the material during lithiation to achieve superior electrochemical performance. To this end, by observing and characterizing the defects of materials, researchers can open a new door for the research field of energy storage materials by studying the relationship between the structure and properties of materials from the atomic level. Although it is no longer rare to use HRTEM, XPS, EELS and other technologies to characterize the defects of materials, these techniques can only be limited to the study of local areas of the surface of the material, which is stretched for the study of the overall defects of the material. In addition, these techniques can only assist in the semi-quantitative analysis of surface defects of materials, while for thicker samples, it is "horizontal to the peak of the ridge, the depth is different." Especially for samples with different internal defects and surfaces, it is even more powerless. Here, the author has compiled some high-level defect characterization methods for characterizing the defect structure and content from the macroscopic whole point of the material in the research field of material defect engineering in 2018 and analyzed the following. If there is incompleteness, welcome to add.
[positron annihilation spectrum]
The positron annihilation spectrum, also known as the positron annihilation lifetime spectrum (PILS), is a novel non-destructive testing technique for materials that study the properties of materials from the atomic level. This technique is commonly used to detect the presence of defects and vacancies in solid materials. The principle of this detection technique is to detect the relaxation time of releasing gamma rays during annihilation by using annihilation when positrons interact with electrons. The length of the relaxation time depends on the pore size of the material, that is, the size of the vacancy. Indirect judgment of the atomic-level defects in the material based on the relaxation time of the quenching makes the technique play a huge role in the defect design and characterization of the energy storage material.
A recent study of palladium-doped molybdenum disulfide materials has been reported in the Nature Communications article (NAT. COMMUN., 2018, 9, 2120). This technique was used to characterize the defects produced after doping, as shown in the figure. The researchers found that after the MoS2 material was doped with 1% palladium, the relaxation time τ1 of the lattice defect and the relaxation time τ2 of the vacancy defect were significantly prolonged. Where τ1 is extended from 183.6s to 206.2s, while τ2 is extended from 355.5s to 384.6s. The increase in these relaxation times marks an increase in the defect dimension. In addition, the intensity of the relaxation time is also improved, which means that the content of defects in the material after doping is significantly higher than that of the undoped molybdenum disulfide material. 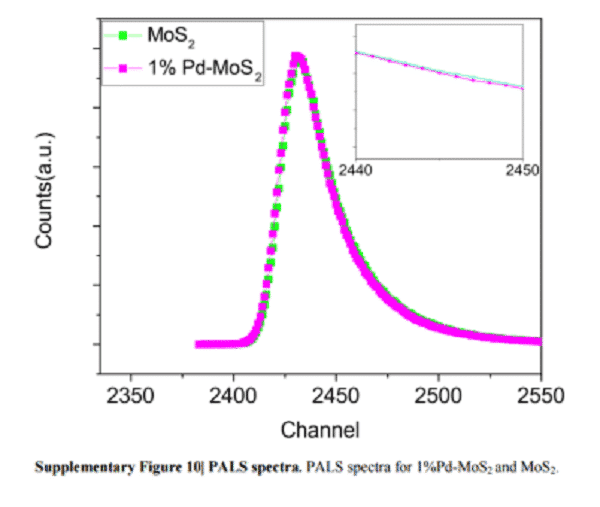 [Extended X-ray absorption fine structure spectrum]
The extended X-ray absorption fine structure (XANES) is an analysis of the chemical environment around the atom of the material by the extended X-ray absorption phenomenon generated by the fluorescence or photoelectron emitted by the X-ray irradiation of the sample. The extended X-ray absorption phenomenon is determined by the short-range ordering function. From the structural spectrum, data such as the type, distance, and coordination number of the adjacent atoms of the absorbing atom can be obtained. The amount of defects can be qualitatively determined by observing the shift of the distance of the adjacent coordination atoms and the intensity of the peaks.
Recently, Advanced Energy Material’s research article reported the use of XANES technology to study the defect of CaMnO3 as an electrode material (Adv. Energy Mater. 2018, 1800612). The researchers used XAS and XANES spectra to analyze oxygen defects in the material. It can be seen from the XANES spectrum that the peak intensity of CMO/S-300 is significantly lower than that of CMO, which proves the decrease of the valence state of the material after sulfur reduction. In the map after Fourier transform, it is seen that the peak intensity of the CMO/S-300 spectrum is lower than that of the CMO, and the spacing corresponding to some peaks is shifted from that of the CMO. These data illustrate the structural changes in the surface of the CMO/S-300 after sulfur reduction and the formation of oxygen defects.

[Electronic Spin Response Spectrum]
Electron spin resonance, also known as paramagnetic resonance response (EPR), is a resonance transition between magnetic energy levels that occurs in a constant magnetic field in a sample under the action of a radio frequency electromagnetic field. When an electromagnetic wave of frequency ν is applied in a direction perpendicular to the external magnetic field B, the energy obtained by the free electron of the material is hν. When the relationship between ν and B satisfies hν = gμB, a magnetic level transition occurs, corresponding to an absorption peak appearing on the EPR. The value of g is determined by the chemical environment in which the unpaired electrons are located. Different compounds have different g values.
A recent study by Advanced Functional Material reported the use of EPR technology to study the 1T-2H phase MoS2-Mxene composite containing sulfur defects as an electrode material for lithium-sulfur batteries (Adv. Funct. Mater. 2018, 1707578). The researchers synthesized a composite with 1T-2H phase MoS2 and MXene. By reducing the ammonia gas, materials with different degrees of sulfur defects were obtained and their structures were characterized. By using EPR test analysis, it was found that materials with different ammonia treatment time contained a certain amount of sulfur defects, corresponding to an absorption peak with a g value of 2.0. In addition, as the ammonia treatment time prolonged, the sulfur defect peak gradually became stronger and wider, which proved that the defects in the material gradually increased with the treatment of ammonia gas. The presence of a large number of sulfur vacancies causes the material to have a positive charge locally, thereby increasing the adsorption of polysulfide anions and achieving efficient polysulfide inhibition.
【summary】
In recent years, research on defect defects in materials has become a very hot topic. However, most of the research is still at the stage of understanding the defects. For this reason, as a material scientist, we should know the world and change the world. In the process of research, we must not only recognize the microscopic world of defects, but also improve and control defects by certain synthetic or preparative methods. Fallen flowers are not heartless things, into Chunni more quadrangle. The defects that seem to reduce the performance of the material not only have no negative impact on the material itself after the directional design, but provide the researchers with the possibility of optimizing the material from the atomic level, so that the electrode material has better performance as a whole. Broaden its wide application in energy storage and other nano science and materials engineering.