 Category Materials Weekly
22 May, 2019
There are helpful ideas about how to cut tungsten carbide rod. As we all known, Tungsten carbide is usually referred to as a sort of a Hard material due to its extremely high hardness in relation to other materials. Typically a Tungsten Carbide can have a hardness value of 1600 HV, whereas mild steel would be only in the region of 160 HV. You wanna try to score or cut off tungsten carbide rods effectively. The following 4 ways may work out, which are abrasion wheel grinding, machining by superhard material, electrolytic machining(ECM), and electric discharge machining(EDM). 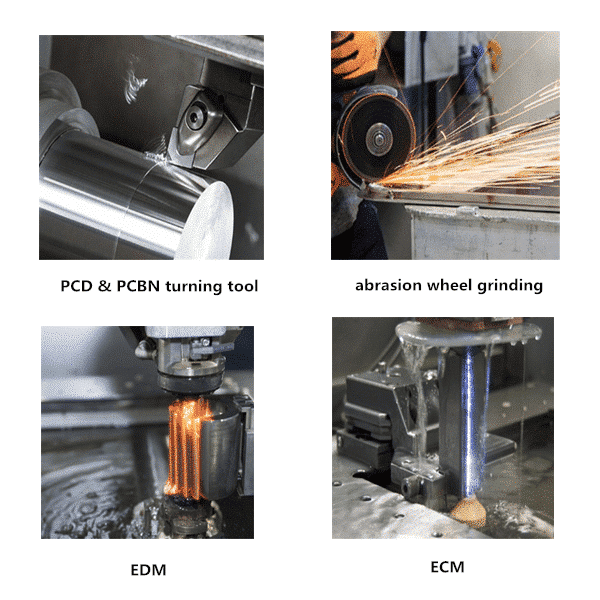 We know that the hardness of the tool material itself must be higher than the hardness of the workpiece to be machined. The Rockwell hardness of the cemented carbide is generally around HRA78 to HRA90.Thus, for now on, materials that can process carbide blanks mainly refer to poly-crystalline cubic boron nitride（PCBN） and poly-crystalline diamond（PCD）.
The main materials for grinding wheels are green silicon carbide and diamond. Since grinding of silicon carbide will generate thermal stress exceeding the strength limit of the cemented carbide, surface cracks happens a lot, which makes silicon carbide not an ideal option to make surface that can be guaranteed.
While diamond abrasive granule in size ranging from 60/70 meshes to 325/400 meshes effectively work on grinding cemented carbide parts. The larger the value of the particle size, the higher the machining accuracy. In general 80/180 will nicely suitable for fine-finishing of various carbide moulds.
Although the PCD grinding wheel is qualified complete all the tasks from roughing to finishing on carbide blanks, in order to reduce the loss of the grinding wheel, carbide blanks will be pre-processed by electric machining method, then do semi-finishing and fine-finishing by grinding wheel at last.
There is a chart showing common processing parameters when PCD wheel grind on carbide material.
Fig.1 processing parameters of diamond grinding wheel when cutting

While doing PCD wheel grinding, low feed speed is critical. That’s because higher speed it takes, the higher grinding temperature, which is a cause of severe wear of the grinding wheel. It’s also not the higher the better. On the contrary, if feed speed is too low, resulting huge cutting thickness, surface roughness of the machined surface is definitely getting affected, and the wear of the grinding wheel also increases.
Another element to be paid attention is that the coolant used must be free of sulfur and have a pH of 7 to 9. Otherwise the coolant will corrode the cobalt binder of the cemented carbide, and the reduction of cobalt will result in a failed microstructure of the cemented carbide, as shown as pic 2. 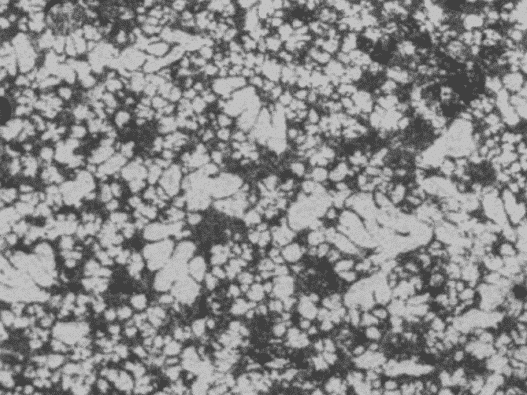 Cut carbide by milling and turning

Materials of CBN and PCBN, intended as a method to cut black metals with hardness, such as hardened steel and cast steel (iron). Boron nitrite is able to withstand high temperature’s influence (above 1000 degrees) and hold hardness at 8000HV.This property makes it equal to processing of carbide blanks, especially for those structural parts comprised by carbide core and steel casing under an interference fit.
Nevertheless, when the hardness of cemented carbide parts is higher than HRA90,totally out of boron nitrite’s league to cut, no more need to insist on PCBN and CBN tools.we can only turn to diamond PCD cutters as a substitute under this condition. There are certain advantages of PCD to machining TC-based carbide blanks, such as its hardness that can reach more than 10000HV( 100–120 times that of cemented carbide). PCD tools also have a thermal conductivity of 700 W/mK, which is 1.5 to 9 times that of cemented carbide. It helps to achieve the roughness of surface on carbide blanks up to Ra0.2μm.
We still can’t lose sight of disadvantage of PCD inserts, its inability to obtain extremely sharp edges and the inconvenience to be fabricated with chipbreakers. Therefore, PCD can only be used for fine cutting of non-ferrous metals and non-metals,but can’t achieve ultra-precision mirror-cutting of carbide blanks,at least not yet.
Cut carbide by electromachining

Electrolytic processing is the processing of parts by the principle that carbide can be dissolved in the electrolyte (NaOH). It ensures that the surface of the carbide workpiece doesn’t get heating up. And the point is that ECM’s processing speed and processing quality are independent of the physical properties of the material to be processed. 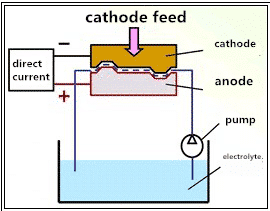 Pic.3 Principle of ECM carbide blanks
As shown in the picture 3, the carbide workpiece is connected to the direct current positive electrode functioning as an anode, and the negative electrode of the tool and the direct current power source is connected as a cathode. Under the action of the current, as the cathode is fed, the cemented carbide on the anode is continuously dissolved in the electrolyte until it is processed into the desired shape size. The whole process is carried out at room temperature.
The chemical reaction equation on the anode:
W+O2=WO2
WO2+2NaOH=Na2WO4+H2O
Co+M2A=CoA+2M–2e
In general,its processing parameters are:
DC voltage 10~15V. Current density 10~3010~30(A/cm²), electrolyte pressure 1~3 （kgf/cm²）

Fig.3 Comparison of electrolytic processing parameters
Compared to other material, during cutting carbide blank, electrolyte’s pressure is an important factor affecting the surface quality of the finished product. When it is too high, the flow rate of the electrolyte is going to be too fast, which causes the WC particles to be washed away by the electrolyte before they are completely dissolved.
What happens if WC particles and Co particles to be removed at an inconsistent rate? Yes, many spots on workpiece’s surface will appear. Another factor worth noting is that the carbide material of the workpiece is more uniform in microstructure and with finer particle size, the more accurate the surface precision will be.
After rough machining, the surface roughness of the carbide blank can reach Ra0.8~0.4μm, and the average machining accuracy can reach ±0.1mm. The productivity of ECM is several times of EDM, and since ECM does not consume tool electrodes, the cost is also low.

The principle of EDM is based on the electrical corrosion phenomenon between the tool and the workpiece (positive and negative electrodes) during the pulse spark discharge to remove excess carbide parts to achieve the predetermined processing requirements for the size, shape and surface quality of the workpiece. Only copper-tungsten electrodes and copper-silver electrodes can process carbide blanks.
In short, EDM does not utilize mechanical energy, does not depend on cutting forces to remove metal, but directly uses electrical energy and heat to remove the carbide part. Compared with mechanical cutting,
EDM has the following characteristics:
1. The material removal is achieved by the thermal erosion of the discharge. The processability of the material mainly depends on the thermal properties of the material, such as melting point, specific heat capacity, thermal conductivity (thermal conductivity), etc., almost independent of its mechanical properties such as hardness and toughness.
2. Can process special and complex shapes of parts.
3. The whole process can be automated.
4. Since EDM is not affected by the hardness of the material, it can be processed after quenching.
EDM has its unique advantages, but at the same time has certain limitations, which are manifested in the following aspects:
1. Processing efficiency is relatively low. In general, the processing speed per unit of machining current does not exceed 20 mm3 / (A · min). The material removal rate of EDM is relatively low compared to machining. Therefore, machining cutting is often used to remove most of the allowance, and then EDM. In addition, there is a prominent contradiction between the processing speed and the surface quality, that is, the processing speed during finishing is very low, and the rough processing is often limited by the surface quality.
2. The surface after EDM will have a metamorphic layer or even microcracks. Due to the instantaneous high heat generated on the machined surface during EDM, thermal stress deformation occurs, resulting in a deteriorated layer on the surface of the machined part.
3. Under normal circumstances, the minimum corner radius obtained by EDM is slightly larger than one by ECM, which is generally 0.02~0.03mm. If the electrode is worn, the corner radius will be larger than that value. There is no possibility for EDM to obtain completely right angle and utmost angular deviation.
4. The discharge part must be in the working fluid during EDM, otherwise, an abnormal discharge will happen also lead to trouble to observe the processing state. 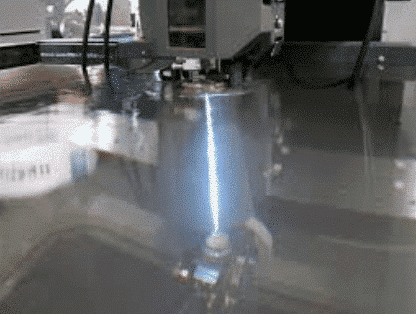 Pic.4 discharge part must be in the working fluid during EDM
5. Actually, the “glow” shows on the machined surface are consists of a number of pulsed discharge pits. Thus, the finished surface will never have the “glow”, which is the consequence of being polished by other processing methods.
4 Comments

Yes, Waterjet Cutting technologies can almost cut anything , it is only a matter of time.

vamtam-theme-circle-post
 Category Materials Weekly
Cemented carbide is a kind of alloy made by powder metallurgy, which is composed of...
Read More