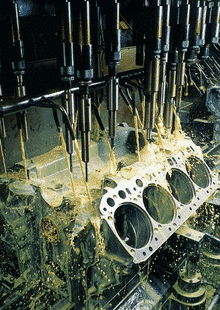 Cutting fluid (coolant) is a kind of industrial liquid used in metal cutting and grinding process to cool and lubricate cutting tools and workpieces. Cutting fluid is composed of a variety of super functional additives, which are scientifically combined. It also has good cooling performance, lubrication performance, rust-proof performance, oil removal, and cleaning function, anti-corrosion function, and easy dilution characteristics. It overcomes the shortcomings of traditional soap-based emulsifier, such as easy odor in summer, difficult dilution in winter and poor rust-proof effect, and has no adverse effect on lathe paint. It is suitable for the cutting and grinding of ferrous metals and is the leading grinding product at present. Cutting fluid is superior to saponified oil in all indicators. It has good lubrication, cooling, cleaning, rust-proof characteristics, and has the characteristics of non-toxic, odorless, non-corrosive to the human body, non-corrosive to equipment, non-polluting to the environment and so on.

Cutting fluids The history of human use of cutting fluids can be traced back to ancient times. When people grindstone, copper and iron, they know that watering can improve efficiency and quality. Olive oil was used in turning piston pump castings in ancient Rome, and butter and water were used to polish metal armor in the 16th century. Since John Wilkinson developed a boring machine to process the cylinder of Watt steam engine in 1775, the application of water and oil in metal cutting has appeared. After a long period of development in 1860, various machine tools such as turning, milling, planer, grinding, gear processing, and thread processing appeared one after another, which also marked the beginning of large-scale application of cutting fluid.

In the 1980s, American scientists began to evaluate cutting fluids. F. W. Taylor discovered and explained the phenomenon and mechanism that the cutting speed can be increased by 30%~40% by using pump to supply sodium carbonate aqueous solution. In view of the fact that the tool material used at that time was carbon tool steel and the main function of cutting fluid was cooling, the term “coolant” was put forward. Since then, cutting fluids have been called cooling lubricants.

With the continuous improvement of people’s understanding of cutting fluid and the enrichment of practical experience, it is found that good machined surface can be obtained by injecting oil agent into the cutting area. At first, people used animal and vegetable oils as cutting fluid, but animal and vegetable oils are easy to deteriorate and have a short period of use. At the beginning of the 20th century, people began to extract lubricating oil from crude oil and invented various lubricating additives with excellent performance. After the First World War, the research and use of mineral oil and animal and vegetable oil composite oil began. In 1924, cutting oil containing sulfur and chlorine was patented and applied to heavy cutting, broaching, thread and gear processing.

Each type of cutting fluid will contain various additives besides base oil: rust inhibitor, non-ferrous metal corrosion passivator, defoamer and so on.

Some manufacturers will have the classification of microemulsions; they are generally considered to be categories between emulsion and semisynthetic cutting fluids.

The cooling effect of cutting fluid is through convection and vaporization between cutting tool (or grinding wheel), chips and workpiece heated by cutting, which takes cutting heat away from the tool and workpiece, thus effectively reducing cutting temperature, reducing thermal deformation of workpiece and tool, maintaining tool hardness, improving machining accuracy and tool durability. The cooling performance of cutting fluid is related to its thermal conductivity, specific heat, vaporization heat and viscosity (or fluidity). The thermal conductivity and specific heat of water are higher than that of oil, so the cooling performance of water is better than that of oil.

In metal cutting process, cutting fluid is required to have a good cleaning effect. Remove the generated chips, abrasive chips, iron powder, oil and sand particles, prevent the contamination of machine tools, workpieces and tools, and keep the cutting edge of tools or grinding wheels sharp, without affecting the cutting effect. For oil-based cutting oil, the lower the viscosity, the stronger the cleaning ability. Especially for cutting oil containing kerosene, diesel oil and other light components, the better the permeability and cleaning performance. Water-based cutting fluid containing surfactant has better cleaning effect because it can form adsorption film on the surface, prevent particles and sludge from adhering to workpieces, tools and grinding wheels. At the same time, it can penetrate into the interface between particles and sludge, separate it from the interface, take it away with cutting fluid, and keep the interface clean.

In metal cutting process, the workpiece should be corroded by contact with corrosive media such as cement produced by decomposition or oxidation of environmental medium and cutting fluid components, and the surface of machine tool parts contacted with cutting fluid will corrode accordingly. In addition, when the workpiece is temporarily stored after processing or in the process of flow between working procedures, the cutting fluid is also required to have a certain anti-rust ability to prevent the corrosion of metal caused by environmental media and residual cutting fluid, such as sludge and other corrosive substances. Especially in the wet and rainy season in southern China, more attention should be paid to the rust prevention measures between processes.

In addition to the above four functions, the cutting fluid used should have good stability, and no precipitation or stratification, oil precipitation, soap precipitation and aging phenomena will occur during storage and use. It has a certain resistance to bacteria and fungi, and is not easy to grow fungi and biodegrade, leading to odor and deterioration. No damage to painted parts, no harm to human body, no irritating odor. No smoke, fog or less smoke during use. It is easy to recover, low pollution, and easy to treat the discharged wastewater. After treatment, it can meet the national standards for industrial wastewater discharge.

Cutting oil containing extreme pressure additives is effective when cutting speed does not exceed 60 m/min for any material. In high-speed cutting, because of the high calorific value and the poor heat transfer effect of oil-based cutting fluid, the temperature in the cutting area will be too high, which will lead to smoke and fire in the cutting oil, and because the workpiece temperature is too high, thermal deformation will occur, which will affect the workpiece processing accuracy, so water-based cutting fluid is often used.

Emulsion combines lubricity and rust resistance of oil with the excellent cooling ability of water, and has good lubrication and cooling performance, so it is very effective for high-speed and low-pressure metal cutting which generates a lot of heat. Compared with oil-based cutting fluid, the advantages of emulsifier are greater heat dissipation, cleanliness, economy brought by water dilution, and the health and safety of operators, which make them happy to use. In fact, in addition to the particularly difficult materials, the emulsifier can be used for almost all light and medium load cutting and most heavy load processing. The emulsifier can also be used for all grinding processes except thread grinding, groove grinding and another complex grinding. The disadvantage of the emulsifier is that it is easy for bacteria and mildew to multiply and make the effective components of the emulsifier produce chemical decomposition and odor. Deterioration, so generally should be added to the toxic organic fungicides.

The advantages of chemical synthetic cutting fluid are economy, fast heat dissipation, strong cleanliness, and excellent workpiece visibility. It is easy to control the processing size. Its stability and anti-corruption ability are better than emulsified fluid. The poor lubrication will cause the adhesion and wear of the moving parts of machine tools. Moreover, the sticky residues left by chemical synthesis will affect the movement of machine parts and will cause rust on the overlapping surfaces of these parts.

In general, water-based cutting fluid should be selected in the following circumstances:

2. High speed and large feed cutting make the cutting area exceed the high temperature, smoke is intense, and there is a fire danger.

3.Considering the process of the former and the latter, it is necessary to use water-based cutting fluid.

4.Hope to alleviate the pollution and dirty around the machine tool caused by oil splash, oil mist protection and diffusion, so as to keep the operating environment clean.

When the durability of cutting tools takes a large proportion of the economy of cutting (such as the expensive price of cutting tools, the difficulty of grinding tools, the long time of loading and unloading assistance), the high precision of machine tools, absolutely not allowing water to mix in (to avoid corrosion), the easy collusion of lubrication system and cooling system of machine tools, as well as the occasions without waste liquid treatment equipment and conditions. Oil-based cutting fluid should be considered.

Its heat resistance temperature is about 200 – 300 C. It can only be used for cutting general materials and will lose hardness at high temperature. Because of the poor heat resistance of this kind of tool, the cooling effect of coolant is required to be better, and it is generally appropriate to use an emulsifier.

This material is high-grade alloy steel based on chromium, nickel, tungsten, molybdenum, and vanadium (some also contain aluminum). Its heat resistance is obviously higher than that of tool steel, and the allowable maximum temperature can reach 600 C. Compared with other high-temperature resistant metals and ceramics, high-speed steel has a series of advantages, especially its high toughness, suitable for complex geometry workpiece and continuous cutting, and high-speed steel has good machinability and is easy to be accepted at price. Oil-based cutting fluid or emulsifier is recommended for low and medium speed cutting with high-speed steel tools. In high-speed cutting, water-based cutting fluid is suitable because of its high calorific value. If oil-based cutting fluid is used, it will produce more oil mist, pollute the environment, and easily cause workpiece burns, reduce processing quality and increase tool wear.

The cemented carbide used for cutting tools is composed of tungsten carbide (WC), titanium carbide (TiC), tantalum carbide (TaC) and 5-10% cobalt. Its hardness is much higher than that of high-speed steel. The maximum allowable working temperature can reach 1000 C. It has excellent wear resistance and can reduce the bonding phenomenon between chips when processing steel materials. When choosing cutting fluid, the sensitivity of cemented carbide to sudden heat should be considered, so that the tool can be heated evenly as possible, otherwise, the cutting edge will collapse. Dry cutting is often used in the processing of general materials, but in dry cutting, the higher temperature rise of the workpiece makes the workpiece prone to thermal deformation and affects the processing accuracy of the workpiece. Moreover, cutting without lubricant can increase power consumption and speed up tool wear due to high cutting resistance. Cemented carbide cutting tools are expensive, so from the economic point of view, dry cutting is also not economical. When choosing cutting fluid, the thermal conductivity of general oil-based cutting fluid is poor, so the risk of tool sudden cooling is smaller than that of water-based cutting fluid, so oil-based cutting fluid containing anti-wear additives is generally suitable. When cutting with coolant, attention should be paid to the uniform cooling of the tool. Before cutting, it is better to use the coolant in advance to cool the tool. For high-speed cutting, the cutting area should be sprayed with large flow cutting fluid to avoid tool thermal unevenness and edge collapse and to reduce soot pollution caused by evaporation due to excessive temperature.

Alumina, metal and carbide are sintered at high temperature. The wear resistance of this material at high temperature is better than that of cemented carbide. Dry cutting is generally used, but water-based cutting fluid is often used in consideration of uniform cooling and avoiding excessive temperature.

It has very high hardness and is generally used in cutting. In order to avoid excessive temperature, water-based cutting fluids are used in many cases, just like ceramics.